The goal of North American Occupational Safety & Health (NAOSH) Week is to focus the attention of employers, employees, the general public, and all partners in occupational safety and health on the importance of preventing injury and illness in the workplace, at home and in the community. NAOSH week is taking place this year from May 6-12, 2018.
According to the NAOSH Week website, NAOSH Week presents an excellent opportunity to focus, reinforce and strengthen commitment to occupational safety and health. Participation and involvement in NAOSH Week has been shown to:

According to the 2018 NAOSH Week Resource Guide, the Canadian Society of Safety Engineering (CSSE) originally held a Canadian Occupational Health and Safety Week (COHS), which was observed from 1986-1996 and had grown out of an initiative that began in the late 1970’s in Newfoundland & Labrador.  In 1996, during the North American Free Trade Agreement (NAFTA) talks between the governments of Mexico, United States, and Canada, workplace safety within the boundaries of all three nations was discussed by government labour department representatives. Canada’s representative at these talks was familiar with Canada’s COHS Week and suggested to his Mexican and American counterparts that their countries may wish to become involved in a similar endeavor. Subsequently, CSSE was approached for permission and support to expand the COHS Week format and experience to the United States and Mexico.  In September 1996, a proposal was taken to the NAFTA meeting that would see a North American wide program take the place of the Canadian Week. NAOSH Week was first launched in June 1997, marked by an agreement between Canada, the United States and Mexico. The CSSE was officially recognized by Labour Canada as the safety organization responsible for NAOSH Week. It was agreed that Labour Canada would continue to play the lead political role for North America for three years to allow the partnership concept an opportunity to develop. NAOSH Week was implemented under this plan between 1997 and 2000. Since 2000, the responsibility and management of NAOSH Week has continued through an effective partnership with CSSE, the Canadian Centre for Occupational Health and Safety (CCOHS) and Employment and Social Development Canada’s Labour Program (formerly Labour Canada). CSSE has been successful in bringing the American Society of Safety Engineers (ASSE) into the partnership and brought Threads of Life into the partnership in 2010. Together, many safety partners now throughout North America work hard to promote and encourage the goals of NAOSH Week. (2018 NAOSH Week Resource Guide).
Since 2009, the BCRSP is proud to be a resource champion for NAOSH Week, and we encourage all CRSPs to lead NAOSH Week activities in their workplaces and communities. 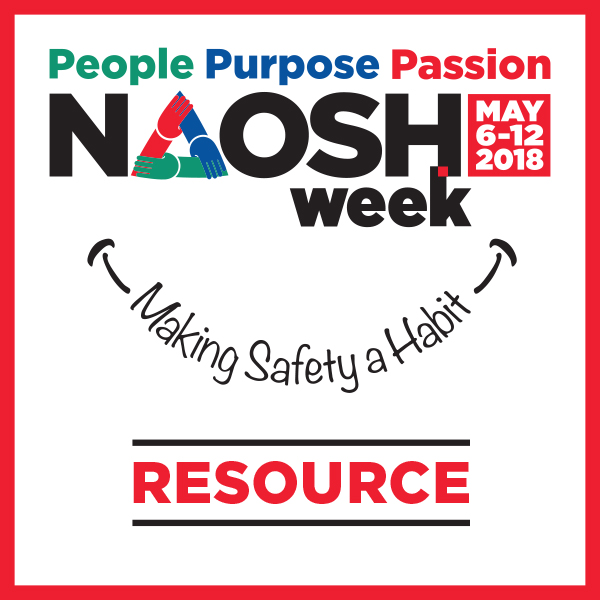 To find out more about events happening in your region, or to post your event, visit http://naosh.org/english/events.html